I once asked one of my former colleagues if he had learned a new programming language or web framework in addition to Ruby on Rails (RoR), and confidently enough he answered he would have to stick to RoR unless he couldn’t find a job anymore. Apparently, he always has work to do with Ruby on Rails to build web applications for his clients. Despite new trending web frameworks, most of my former colleagues and I are still using Ruby on Rails for our web application development and software products for clients because we love it and its powerful flexibility, community, and as well as inspiring world class websites.

Basecamp is the project management and communication software that puts everything as an all-in-one toolkit for working remotely. It enables your team to work together with peace of mind. As a matter of fact, Basecamp used Ruby on Rails internally and then released as an open source web framework. Yeah special thanks to Basecamp!

HEY is designed, built, and backed by Basecamp. Thus, it’s been using Ruby on Rails as well. HEY is a new approach of how emails should work —  something you want to use, not something you’re forced to deal with. If you’re curious about it, check how it works.

Airbnb is the world’s largest accommodation and travel experience reservation platform where accommodation includes hotel or boutique hotel rooms, shared rooms, apartments, villas, vacation rentals, homes, and as well as camping tents. Founded back in 2008, the website was built with Ruby on Rails, and until now it is actively being scaled and developed based on Ruby on Rails. To date, Airbnb has more than 800 million guest arrivals and 62 languages, and is available in more than 220 countries and regions.

Couchsurfing is a global hospitality exchange community, aiming to bring travelers together with locals. Simply, members can request lodging directly from other members, hangout with other members, join or create events, yet following terms of services of the community. Now it is one of the most popular travel social networking websites in the world. Since beginning, the platform has been using Ruby on Rails for its core backend.

Shopify uses cutting-edge technology backed by Ruby on Rails to create a world-class e-commerce platform. It’s a software-as-a-service (SaaS) platform that enables entrepreneurs to create and manage their online shop easily with handy functionality and various available payment gateways. Moreover, for developers, they can build RoR applications with Shopify API, and POS embedded applications with its POS App SDK.

Fiverr is an Israeli online marketplace for freelance services. The company uses Ruby on Rails as core technology to build a platform where freelancers can offer services such as web design, logo design, copywriting, content writing, and software development to customers worldwide. Stats in SimilarWeb shows that by October 2020 the platform gains more than 58 million visits and 520 global rank worldwide, which makes it No. 1 freelance platform in 2020.

You have a brilliant project idea and want to execute and transform it into reality, but you’re struggling with funding, thus Kickstart can help you! The platform is a crowdfunding service via which you can run a campaign to raise funds from the right group of people who have belief in your project, and you as project owner can offer a gift, a physical product, or something valuable in return. The project idea can be something from arts to technology.

Apparently, Kickstarter annually helps a lot of entrepreneurs around the world to turn their dream projects into reality by collecting millions of dollars. Interestingly, the platform has been developed by Ruby on Rails since its early days.

Like Kickstarter, Indiegogo is a popular crowdfunding platform where various categories of potential projects can be funded to transform into reality. Campaigns in different industries like technology, education, physical product development, films, or even charity are hosted on the platform. The platform has been developed and scaled with Ruby on Rails.

Heroku is a cloud application platform where several programming languages applications can be supported including Ruby. The platform allows the developers to mainly focus on application development, deploy, and scale seamlessly. The platform was acquired by Salesforce in 2010 for $212 million and in July, 2011 Ruby creator, Yukihiro “Matz” Matsumoto joined the company and led as Chief Architect, Ruby.

GitLab is a complete web-based DevOps lifecycle platform, delivered as a single application, that provides a Git-repository manager providing wiki, issue-tracking and continuous integration and deployment pipeline features. The platform is written in Ruby on Rails, and Go programming language and Vue.js are also integrated. GitLab offers freemium and paid subscription service and becomes one of the leaders in the Git market with 100,000 users.

If you’re a developer, you surely know Github. It’s a development platform where you can host and review code, manage projects, and build software alongside 50 million developers. Despite enormous daily requests, the platform still relies on Ruby on Rails to respond seamlessly.

Founded in 2006 and crafted by Ruby on Rails, the web-based slide hosting platform is recognized as the most visited website among the world’s top 100 websites. It’s being trusted by over 80 million professionals browsing any of 18 millions uploads in 40 content categories.

Dribble is a self-promotion and social networking platform for digital designers and creatives. Individual designers and creatives can post their designs (i.e shots) as portfolio and showcases as to build personal branding and get hired for the contracts. Users can follow other users to make connections together and share likes and comments. Moreover, this world’s top platform is designed with Ruby on Rails as its core backend.

Codecademy is an online interactive learning platform for those who want to learn to code. The platform offers 12 different programing languages such as Python, Ruby, C#, C++, Java, JavaScript, Go, Swift, HTML, and CSS. The platform has been developed with Ruby on Rails and over 45 million people have taken courses and tests on the platform.

Scribd is the world’s largest digital library with over 60 millions documents including ebooks, audiobooks, music, and magazines. The platform has over 1 million subscribers and acts as a complete social network providing communication tools integrated directly into the interface. Scribd is developed with Ruby on Rails as the core framework and also integrates React into the system.

Square offers solutions and tools to help grow businesses through its cutting-edge technology based on Ruby on Rails. Square helps millions of sellers run their businesses from secure credit card processing to point of sale solutions. It was founded in 2009 and one of its founders is Jack Dorsey, a twitter co-founder.

Treehouse is an online technology school offering beginner to advanced courses in web design, web development, mobile development, as well as game development. However, the school is primarily focused on the beginner level that can help students develop skills for a career in the tech industry. The school platform chose Ruby on Rails as its main backend framework and serves over 50,000 students.

Goodreads is a social catalog website that allows users to search for books, reviews, and quotes. Users can sign up and keep track of their books as catalogs and reading lists. The website is being developed with Ruby on Rails as the core backend and integrates React.

Cambodia’s official Yellow Pages is the leading business directory online in Cambodia and receives daily high traffic. The entire website is crafted with Ruby on Rails.

The Online GIS for creating & sharing amazing interactive web maps. The platform runs based on Ruby on Rails as a core backend.

Bongloy is a Southeast Asia based fintech company focusing on open API for card issuance and digital payment infrastructure. Our secure, flexible and scalable open API platform enables businesses to acquire and issue cards. We believe everyone should have access and be able to contribute to the digital economy in developing countries seamlessly.

After you’ve been through inspiring popular platforms built with Ruby on Rails, you may consider it for your own project as well. There are some reasons why these companies including my startup prefer Ruby on Rails:

In conclusion, it’s your turn to build your project with Ruby on Rails and get a success like one of platforms above. 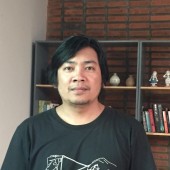 Sinal is a co-founder of Zenapp Studio. He's a software developer, internet marketer, and startup entrepreneur. When he's not in front of the computer, he is on Aikido mats. He is Cambodian and currently lives in Siem Reap, Cambodia.